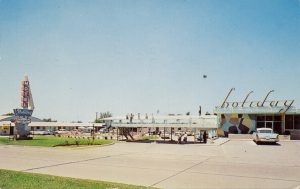 Oklahoma is included in the list of states I’ve visited during my lecturing career, but just barely; in 2012, when I was participating in a professional development conference for teachers and administrators in the Fort Smith, AR school district, I took the opportunity to drive across the Arkansas River and have lunch at the 4 Star Diner in Muldrow. I obviously didn’t get to see much of the state, but what I saw certainly resembled the scene in the card illustrating this post: flat, incredibly sunny, and hot.

The Sooner State is on my mind because of recent news reports about an interesting proposal by State Sen. Ronald Sharp (R-Shawnee). In a bill appropriately labeled Senate Bill 911 (SB911), he proposes the creation of a new system for student discipline in the state’s schools to help address bullying and misbehavior towards teachers.

The legislation (a copy of which is embedded below) would add a new section to the state statute that governs disciplinary procedures in schools. It reads:

The board of education of each school district in this state shall have the option of adopting a procedure allowing superintendents, principals and vice principals to issue fines for violating the district’s policy [on bullying], pursuant to Section 2 of this act.

If a school district decides to adopt a procedure for issuing fines, there a number of provisions that the district must include:

Senator Sharp’s bill also provides that any revenues collected for bullying fines “shall be allocated by the district board of education to provide campus security or academic scholarships.” If adopted, the legislation would take effect on July 1, 2016.

As a former school board member and as the relative of several teachers, I understand the challenges facing educators and the desire to take stronger steps to impose order in the classroom. Digital devices and social media have leveled the playing field between students and teachers, causing problems in both directions. And of course, the explosion of social media has opened up endless new opportunities for bullying, abuse, and harassment among students.

All that being said, I do not think that it is a good idea for a school district to add monetary fines to its list of student penalties. Conceptually, it unnecessarily blurs the distinction between schools and the criminal justice system. What would be next? Overnight detention? Solitary confinement? It is a grim view of education.

On a more practical level, the proposed legislation unnecessarily adds one more layer of complexity (with reporting requirements!) to already overworked schools. It may be utterly impractical to enforce, given the level of bullying in general and the resources required to do an investigation of each incident. It creates yet another potential source of controversy and strife for educators and administrators, as economically-stressed parents undoubtedly will vigorously object to any imposition of a financial penalty. It raises the specter of rampant classism, as those with means will be able to bully with relative impunity, while poorer students are shuffled off to “re-educational” counseling. And lastly, it opens schools to the temptation of over-zealous enforcement to help cover the cost of district security.

This proposal is reflective of a long-standing and destructive impulse on the part of legislators to solve every social problem by ratcheting up penalties well beyond the level of rationality and common sense. It is an intellectually lazy and politically facile approach to serious problems. A far more effective and long-lasting approach would be to invest additional funds in public education and address these issues before they arise. Among the things that would help: lower class sizes (more teachers), more paraeducators, better curricula to teach technology and digital citizenship, and longer school days.