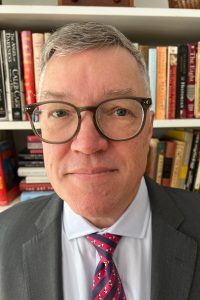 Frederick Lane is an author, attorney, lecturer, and educational consultant who has written ten books on the legal and cultural implications of emerging technology. In his growing Cybertraps series, Lane explores the various risks that digital technologies pose for children, educators, and parents. As a result of his research and writing, Lane is a nationally-recognized expert on digital misconduct, cybersafety, cyberethics, privacy, and related topics.

Over the last two decades, Lane has spoken to a wide range of audiences, including colleges, universities, schools and school districts, departments of education, and various non-governmental organizations in a number of countries, including the United States, Canada, China, France, England, and Ghana. He is a member of the Fulbright Specialist Roster as an expert in Law and Computer Technology.

Lane has written ten books, including most recently “Cybertraps for Educators 2.0” (2020), “Raising Cyberethical Kids” (2020), and “Cybertraps for Expecting Moms & Dads” (2017). During the course of his writing career, he has appeared as a guest on a variety of national media programs, including: Comedy Central’s “The Daily Show with Jon Stewart”; ABC’s “Nightline” and “Good Morning America Weekend”; CBS’s “60 Minutes” and “Sunday Morning with Charles Osgood”; NBC’s “Today Show” and “Weekend Today”; as well as various BBC and CNN documentaries (including “The Nineties”). He has also been featured on numerous national, regional, and local radio programs. Lane is currently working on his next mainstream nonfiction book, entitled “The Rise of the Digital Mob” (Beacon Press 2022).

Prior to moving to Brooklyn, NY with his wife, Dr. Amy Werbel (Profess of the History of Art, Fashion Institute of Technology), Lane lived for 23 years in Burlington, Vermont. During his time in Burlington, he served in several local positions, including ten years as a member of the Burlington School Board (including two years as Chair of the Board), Ward Clerk, a member of the Burlington Fire Commission, and as a board member for Vermont Community Access Media.

Pull Up a Chair

In response to the passage of the Communications Decency Act in 1996, Lane began researching the legislative and media response to the rise of the online adult industry. The resulting book, Obscene Profits: Entrepreneurs of Pornography in the Cyber Age, was the first of what are now ten mainstream non-fiction books. The others are:

In addition to these books, Lane has written numerous magazine articles on a variety of topics, including constitutional rights (particularly freedom of speech), privacy online and in the workplace, the impact of technology on our rights and liberties, and the separation of church and state.

Thank you for visiting Cybertraps! My name is Fredrick Lane and I am an expert on the impact of emerging technologies on society. Here you will find advice on how to keep your private information, private. It’s never too late to secure your life.