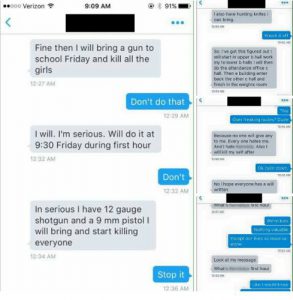 A confluence of some of the most disturbing trends in American society led to the lockdown Wednesday of Highland High School in Pocatello, Idaho.

In the wee hours of the morning on October 7, an unnamed 15-year-old male had a Facebook Messenger exchange with another person, age and gender unknown. A screenshot of a portion of the conversation was obtained by local media and offers a chilling insight of just how established the script for school shootings has become. The captured conversation appears to directly follow a denial of the male teen’s request for nude photos:

The conversation was reported anonymously to school officials later that morning. Highland High School was immediately put on restricted access and the Pocatello Police Department quickly began a digital investigation to determine the identity of the individual making the threats. By late afternoon, the young man had been identified, arrested, and incarcerated in a local juvenile detention center.

He has been charged with two counts of telephone harassment and one count of threatening violence on school grounds.

During the course of the investigation, police determined that the same individual had used a Twitter account to harass various Highland High School students (primarily women) and make racist statements.

This incident offers us an opportunity to consider some of the corrosive forces that are at work in our society. We are fortunate to be able to do so, at least in this case, without also mulling the lost opportunities and wasted lives of an actual shooting. Each of the following can (and probably will) be the subject of much longer posts at some point, but are offered for discussion purposes today: