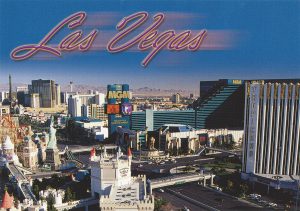 A 25-year-old Las Vegas teacher named Jill Lafave is charged with having sex with an 16-year-old male student in classroom at Valley High School, just east of the city’s infamous Strip. Lafave, who is currently on paid administrative leave, was an English and special education teacher at the high school.

The two were reportedly seen engaging in a sex act by a hall monitor during school hours. The alleged victim is a student in Lafave’s special education classs.

Following Lafave’s arrest in early January, investigators seized her phone and determined that she and the student exchanged over 13,000 text messages, many of which had sexually explicit content. According to local TV station KTNV, the two referred to each other as “mom” and “son,” although Lafave asked him not to call her “mom” when they were discussing sex. She also warned the student to be more careful because she was worried they would be discovered. Even before the hall monitor caught them, her concerns were justified; students told reporters that rumors were flying around various social media sites that something was going on between Lafave and the student.

What Secrets?: It is difficult, if not impossible to keep a secret of this type in a small, contained community like a high school. Teenagers have a heightened social radar that makes them very sensitive to the activities of their peers, particularly when it comes to relationships. The odds that something like this would go undiscovered are almost nil.

Awareness and Supervision: That being said, it is clear that this “relationship” flew under the radar for a considerable period of time, or at least long enough for Lafave and the student to exchange 13,000 text messages. Reports also suggest that Lafave and the student hung out together nearly every single day. There are two categories of people who should have observed this behavior and asked some tough questions: school personnel and the student’s parents. Certainly, if there was sufficient suspicion to spark rumors on social media, it’s shameful that adults did not step in sooner.

Public Notice: Ramona Esparza, the principal of Valley High School, sent a letter to parents about the incident. It was remarkably uninformative:

The safety of our students is the number one priority at Valley High School. As always, we want to keep you informed of important issues happening within our school community.

Some of you may be aware that there were allegations related to inappropriate conduct regarding a teacher at our school. We wish to assure you that we are cooperating fully with the CCSD Police Department.

Valley High School is committed to providing quality instruction and will ensure that our students continue receiving an excellent education. In the immediate future, our staff will work hard to minimize any disruption in our learning environment.

Thank you for your patience. Please do not hesitate to call our office at xxx-xxx-xxxx.

Not only did the letter fail to alert parents to the alleged facts of the case (some of which, at least, are not in dispute), but many parents also felt it was untimely, given that it was sent out nearly two weeks after the arrest occurred.

As a former school board member, I know that school administrators necessarily walk a fine line between releasing information and cooperating with law enforcement when incidents like this occur. It is important not to prejudice a potential criminal case and of course, a district should be very careful not to invade a student’s privacy. Nonetheless, it does seem that the school could have done a better and more timely job of notifying the community of the incident and the subsequent investigation.