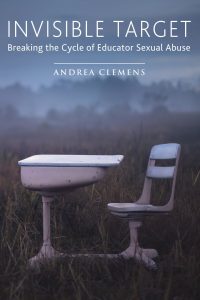 In the fall of 1981, Andrea Clemens entered the ninth grade and was upset to find out that one of her instructors was Robert Baker, a science teacher at Norwood Junior High School. The year before, Clemens had Baker for study hall and felt that he had ignored her and played favorites with other students. But Clemens attracted Baker’s attention when she performed well on the first of his notoriously difficult science tests, and he began a multi-year grooming process that culminated in his sexual assault of the underage Clemens.

Mr. Baker … made me feel smart by talking to me on a level that felt so mature. I believed he really saw me, and I no longer felt invisible or insignificant. He would really compliment me on my maturity level and point out the ways I was beyond my years compared with my classmates. He would tell me he couldn’t talk with the other kids or even some adults the way he could talk with me. Hearing him say such things shocked and thrilled me. I was beside myself with pride to know that I was making such an impression on him. Now, as I write these words, I roll my eyes; this was all so clearly contrived and purposeful, but to the impressionable, needy kid I was, it felt significant and spontaneous. I believed it all.

As the quote makes clear, Invisible Target is Clemens’s first-hand account of Baker’s grooming and eventual sexual assault of her during high school. It is a painful story to read (in fact, I had to take a break a couple of times to give myself time to process the emotions I felt about Clemens’s experiences).

One of the great strengths of the book is that it is an unflinching look not only at the childhood experiences and family dynamics that contributed to Clemens’s vulnerability but also at the complicated and twisted dynamic of the “relationship” that Clemens and Baker shared over a period of years. Indeed, I expect that many readers will find it bewildering, as I did, that no other adult recognized what was going on and stepped in during the months and years of grooming and abuse. It’s heartbreaking to see, through Clemens’s eyes, one opportunity for adult intervention after another slide by.

Eventually, with the help of individual and group therapy with other victims of sexual abuse, Clemens found the personal strength to cut off contact with Baker. The climactic moment is inspiring:

I said, “Bob, it’s over, and I’m not going to talk to you anymore. I am hanging up now.”
And I hung up the phone.
I clicked back over to Andrew [a friend] and told him what happened. He coached me to not answer the phone anymore. Just let the call go to voicemail, and I would be able to screen my calls that way. And that’s exactly what I did for many months until his calls finally stopped. I got very little sleep that night. I was full of brand-new emotions. I had a new lease on life. Whatever the future held for me after that, I knew I would never be back in that hell again.

Clemens’s ability to disconnect from Baker was a significant achievement, but as she makes clear, it was at the same time merely a turning point in her journey towards health and happiness. Baker’s abuse caused (or reinforced) numerous emotional and psychological problems for Clemens that played out in a variety of destructive ways. She details those challenges with frankness and honesty, and helps the reader to understand the myriad ways in which the effects of abuse linger long after the physical assaults have stopped.

The psychological manipulation inherent in these types of cases played out in one particularly painful way. Nearly a decade after freeing herself from Baker, someone asked Clemens if he was still teaching. The question troubled Clemens; despite still thinking that her interaction with Baker had been “special,” she also realized for the first time that he might use similar grooming techniques on other students. She contacted her former junior high principal and a few months later, was interviewed by police investigating possible assaults by Baker on two 14-year-old students.

Although Baker was never charged with a crime for his assault on Clemens, her testimony helped lead to a guilty plea by Baker on charges of indecent assault and rape and abuse of a child. He was sentenced to just 21 months in prison, but must register as a Level Three sex offender and cannot teach again.

Following Baker’s trial, Clemens befriended the other two young victims, and began working as an advocate for victims of educator sexual abuse. She wrote Invisible Target, has researched the techniques used by abusive teachers, and lectures around the country (more information is available on her Web site, AndreaSpeaksOut.com). I particularly admired the fact that Clemens interjected educational aids throughout Invisible Target; each chapter is followed by a number of thoughtful questions under the title “For You, the Reader, Consider This …” Various topics of discussion are proposed for general readers, students, parents, administrators, educators, and sexual abuse survivors.

Readers should keep in mind that the book’s great strength–Clemens’s powerful first-hand account of these painful events–can also be a minor weakness. This is, by its very nature, Clemens’s account of what took place, and in spots, she necessarily speculates about what others might have been thinking or what their motivations might have been. Some conversations are reconstructed years after they occurred, and other voices are largely absent. Given the nature of this book, however, that’s completely understandable, and it does not detract from the importance of what Clemens wrote.

One other interesting thing to consider: the grooming techniques Clemens describes are decidedly old-school from a technological perspective (this book, in fact, was a bit of a flashback for me, since Clemens started high school the same year I started college). As readers of this blog are aware, modern digital technology has made these types of boundary violations far easier because it now possible to communicate directly with children with little or no adult mediation. At the very least, this increases the risk of misconduct (various factors make it difficult, if not impossible, to determine whether the incidence of teacher sexual assaults is increasing). Since the technological genie cannot be stuffed back into the bottle, our only recourse is to hold frank conversations about these risks, educate school communities, and be eternally vigilant in our protection of the “invisible targets” among our student populations.

Invisible Target is a valuable and moving contribution to that vitally important work.