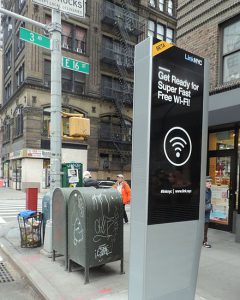 It is difficult to overstate the full depth and breadth of the New York Post‘s loathing for the administration of Mayor Bill de Blasio (and presumably for the Mayor himself).

But of course, that’s not exactly what is going on. Even before Mayor de Blasio was elected, New York City was exploring ways to convert an aging and increasingly obsolete technology — pay phones — into something that would actually be useful. In 2015, a contract was awarded to a consortium of companies called LinkNYC to install 7,000 kiosks equipped with high-speed data connections, Wi-Fi access points, USB charging ports, electronic displays, and embedded Android tablets with Web access. It’s precisely the type of resident- and tourist-friendly communication resource a modern world-class city should offer — at no cost to the taxpayers, it might be pointed out.