An N-Word to the Wise: Digital Stupidity Threatens College Acceptances, Scholarships, and Much More

Senior picture days are a well-established right of passage in American high schools. They are a great opportunity for students to demonstrate school spirit, to capture memories to be laughed over at reunions decades hence, and generally to celebrate the impending transition from childhood to quasi-independent adulthood.

The photo at the top of this post, taken on January 22, 2016, is a fairly typical example of the kinds of photos that are taken on a Senior Picture day. In it, 35 young women at Desert Vista High School in Ahwatukee, Arizona used gold tape to decorate their t-shirts and lined up to form the phrase Best*You’ve*Ever*Seen*Class*of*2015. It’s a nice show of school spirit and youthful enthusiasm. If some of the young women simply had left it at that, there’d by no need for this blog post. 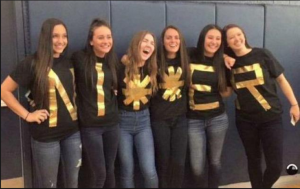 But as is far too often the case, someone (or a group of someones) chose to take Senior Picture Day one ugly step further. Six of the young women (plus a seventh who served as photographer) decided to play human anagram in the school’s gym and used the letters on their t-shirts to spell out the word ni**er. As you can see from the photo to the right, the asterisks were actually part of the anagram.

Based on their expressions, the young women clearly thought that this was a highly amusing photo op. There’s utterly no indication in the photo itself that any of them had any idea of the potential consequences that might flow from such a thoughtless and impulsive act. Faithful readers, of course, have some idea of exactly what was about to hit the fan.

As always, there are numerous lessons that can be derived from this incident. Here’s a run-down of a few of the things that these young women should have considered (or been taught) before allowing someone to photograph their thoughtless behavior.

“Information Wants to Be Free”: According to at least one report, the offending (and offensive) photograph was taken using the Snapchat app, which as most people know is theoretically designed to allow users to share photos that “disappear” after a set period of time. However, a surprisingly large number of people don’t realize or all too often forget that there are a variety of ways in which Snapchat photos can be captured before they vanish. A “friend” of the photographer apparently saved the photo and then re-posted it to Instagram, helping to launch its trip around the globe.

Back in 1984, Stewart Brand (founder of the Whole Earth Catalog) attended the first Hackers Conference. In a now-famous conversation with Steve Wozniack, Brand made the following observation about the dual nature of information:

Brand’s quote (and we’ll come back to the irony of his name at a later time) should be one of the core principles of a digital citizenship curriculum in every school in the country. The following themes should be stressed:

The Internet Operates at the Speed of Light: It’s unclear exactly when the photo of the six girls was taken, but I’m guessing that it was shared on Snapchat sometime mid- to late morning on the 22nd. By early afternoon of that same day, protests began flooding social media (chiefly Twitter and Facebook) and the Desert Vista high school email system. One woman posted a copy of the response she received from Tempe Union High School District Superintendent Dr. Kenneth R. Baca at around 2pm:

Thank you for your email. I am aware of the situation and it is being addressed by the school principal and administration. Disciplinary action is being taken. And the school’s principal is outraged by this incident.

I am appalled, angry, offended and extremely disgusted by the behavior of these 6 young ladies and anyone else who may be a part of this, including the person who took the picture. Their behavior does not reflect the vast majority of the fine young men and women of Desert Vista. There is no excuse for this type of behavior and it will not be tolerated.

It’s not unreasonable to feel at least a little sympathy for school and district administrators, who were clearly blind-sided by this incident. It no doubt was bewildering to all the adults in Desert Vista when a school day that opened with a relatively innocuous senior celebration finished with hostility and even threats from around the globe (which helps explain the multiple Desert Vista police cars parked outside the high school in late afternoon).

Much of the online outrage was driven by a rumor that the punishment for the young women would be limited to a five-day suspension. Someone named Bri Handy started a petition on Change.org demanding that the expulsion of the young women and the firing of the school’s principal; as of February 12, the petition had been digitally signed by over 50,000 people. Ultimately, the district school board tacked on another five days, so each of the young women served a 10-day suspension. However, they did not lose any other school privileges and the Board did not impose a requirement that they apologize for their behavior.

This controversy painfully illustrates the fact that we are losing our ability to think and act deliberately, particularly in emotionally-fraught cases. The virtually instantaneous outrage machinery of the Internet makes it much, much harder for public officials, educators, and parents to gather relevant facts and determine an appropriate punishment. We apparently have reached the point where the simple exercise of due process is considered evidence of a cover-up, obfuscation, malfeasance and denial of justice. Sadly, such concerns have been justified in far too many cases, but there should not be a rush to judgment by people in authority OR by those who occupy the Internet’s vast and typically underinformed peanut gallery.

What We Have Here Is a Failure to Empathize: The decision by at least seven white high school students to stage a photo op to spell out one of the most offensive words in the English language reflects a profound lack of empathy.

For more than a decade, researchers have been raising concerns that the growing use of technology by adolescents is impeding their development of empathy. One recent study found that self-reported feelings of empathy among college students has dropped steadily since 1980, with a particularly precipitous decline beginning around 2001. At the same time, a separate study found that college students admit to being more narcissistic.

The role of technology in these trends is not difficult to discern. On any given day, children between 8 and 18 spend an average of 6-9 hours in front of a screen (and some spend much more). The development of empathy — one of the key components of “emotional intelligence” — is generally believed to require “human touch, face-to-face interactions and communication through verbal as well as non-verbal cues.” Those are forms of interaction that are generally lacking in digital communication technology, and that lack is having a discernable impact on the ability of young people to walk a mile in someone else’s shoes (and we won’t even get into the impact of technology on physical activity).

As is so often the case, a myth from the earliest days of human civilization offers a powerful warning for contemporary behavior, including the use of technology by children. The concept of “narcissism” is drawn from the legend of Narcissus, a beautiful young man who saw his reflection in a forest pool and fell in love with it. But unable to reach the beautiful youth in the pool, Narcissus pined away and eventually died.

I don’t mean to suggest that children who take endless numbers of selfies and relentlessly curate their social media accounts to present only the most perfect images of themselves will suffer the sad fate of Narcissus (although there is considerable concern about the interplay between social media and teen suicide). What I think is of greater concern is that smartphones and social media reinforce the intrinsic self-absorption of children and teenagers and make it that much more difficult to inculcate empathy and a broader sense of social compassion. As is so often the case, there is no easy solution, but figuring out ways to reduce screen time is surely a first step.

“Free Speech” Does Not Mean Consequence-Free: As the many hundreds (if not thousands) of comments on Twitter, Facebook, and other platforms make clear, the battle over the parameters of “speech” in American society is particularly intense these days. Were the young women exercising “free speech,” or indulging in “hate speech”? Were they punished merely because their speech was not “politically correct”? Many people defended the young women on the grounds that our First Amendment is expansive enough to provide protection for any speech, regardless of how offensive, hateful, and/or merely stupid it might be.

While the First Amendment is a remarkably broad shield, it is of course not that simple. Yes, the First Amendment does limit the ability of the government (in this case, the school) to restrict the speech of students. However, most students are not adults, and even if they are above the age of 18, the school still has a legitimate interest in maintaining a safe and welcoming environment for all of its students. A school not only has the ability but also the obligation to take action when speech causes disruption and creates a threat to safety. In my experience, children and teens (and far too many immature adults) are very good at grasping the rights afforded by the Constitution without simultaneously understanding the responsibilities imposed by citizenship in a free society.

Another nuance frequently lost on the free speech absolutists in our society is that the First Amendment applies only to government and its agents. It does not apply to private entities or to individuals. Thus, if another individual or non-government entity disapproves of what the young women did, they can express their disapproval in whatever manner they see fit. For instance, this type of behavior can result in the loss of athletic scholarships or even college admissions.

And thanks to the “public and permanent” nature of digital information, these young women (who all were quickly identified online) will face questions about this incident throughout their college careers and almost certainly in their initial job interviews as well. In those conversations, the mighty First Amendment will offer little more protection than a flag lapel pin.