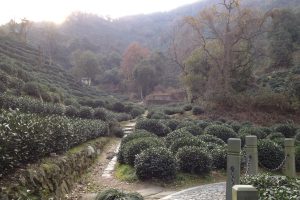 A few years ago, my wife Amy was selected to serve as a Fulbright Scholar, teaching American and art history in Guangzhou, China (you can read about her experiences in her delightful book, Lessons from China.) While we were there, we had a chance to travel to different parts of the country. As a life-long tea drinker, one of the highlights for me was our visit to the China National Tea Museum near Hangzhou, just a quick high-speed train ride southwest from Shanghai.

After visiting the tea museum, we took a bus ride up to the nearby town of Longjing, famous for millennia as the source of longjing or “Dragonwell” green tea. Located at the back of the village is the Longjing Imperial Tea Garden, commemorating the designation of Dragonwell as an Imperial Tea. It was a cool and damp December afternoon, so the garden was not at its finest, but it was still a beautiful place to visit.

I was inspired to take this stroll down memory lane by a terrific blog post from the blog Rockstar Dinosaur Pirate Princess (which may be one of my favorite blog titles of all time). The author took on the challenging issue of consent in the context of sexual activity and boiled it down to a simple metaphor:

Whoever you are initiating sexytimes with, just make sure they are actually genuinely up for it. That’s it. It’s not hard. Really.

If you’re still struggling, just imagine instead of initiating sex, you’re making them a cup of tea.

You say “hey, would you like a cup of tea?” and they go “omg fuck yes, I would fucking LOVE a cup of tea! Thank you!*” then you know they want a cup of tea.

Her post goes on to discuss a variety of tea party scenarios — someone simply says “no, I don’t want tea” or “I’m not sure …” or “yes” at first and then decides not to drink it — and how the person offering tea should respond.

On its own, the post is an amusing and effective discussion of the issue of consent. But then things got even better. A Providence, RI graphic design firm called Blue Seat Studios created an animated version of the blog post and sent it to the author (I’ve embedded the video below). It’s brilliant. I think that this should be shown in every high school and college residence (dorm, sorority, fraternity, etc.) across the country.

[Note to Educators: The version embedded below uses some of the author’s original NSFW language. There is a “clean” alternative if that would cause problems.]

As various commenters pointed out, sexual activity between two adults often begins with highly-nuanced and subtle non-verbal signals, and it not only possible but common for one or both parties to misread the signals. Here in the United States, at least, I think that one of the problems is that we do not easily discuss sexual issues in a frank and matter-of-fact way, particularly in our schools. This blog post and animation offer a clever method for initiating a conversation about one of the more important aspects of sexual activity: is it something that both people have affirmatively agreed to do?

As an alternative (or supplement) to the animated conversation, check out “Wanna Have Sex (Consent 101)” by Laci Green. I particularly like her concept of trying to develop a “consent culture.” That is a theme that I have been exploring with my work on electronic sexual assault.

Tea and Consent from Blue Seat Studios on Vimeo.