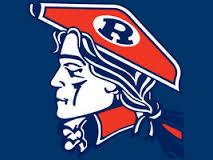 Three weeks ago, Revere High School senior Caley Godino, the captain of the school’s cheerleading squad, received a tweet from her Civics teacher. The day before, the teacher’s tweet said, the turnout for the Revere city election was a shockingly low ten percent; what did the students think about that?

Godino responded before school on November 4, tweeting that “10 percent of Revere voted because the others are not legal.”

In a subsequent interview with the local Fox television station, Godino said that her Civics teacher had made it part of their homework to watch the presidential primary debates. She said that her response was inspired by the comments of Republican candidate Donald Trump, who has made immigration one of the central themes of his campaign. Godino said that she didn’t intend to hurt anyone’s feelings, and pointed out that she didn’t reference any particular group.

This was, in fact, a very Trumpian Twitter exchange: Not only did it deal with his favorite campaign topic but it also demonstrated a complete indifference to actual facts. The teacher set the tone by grossly understating the actual vote total for the Revere election; the actual turn-out was 40.76 percent, not 10. It’s possible that the teacher mistyped the actual figure, but still, one would expect that someone teaching Civics would be a little more accurate.

Godino’s response was equally farcical. The idea that ninety percent of Revere’s residents are illegal immigrants is so ludicrous that it suggests she was purposely exaggerating for effect, which is a typical technique for both teens and Trump.

Fifteen years ago, when the world was not saturated with social media, Godino would most likely have raised her hand and offered her snarky analysis in class. A few people might have laughed, the teacher hopefully would have used the comment to have a brief discussion about factual accuracy and social assumptions, and the incident would have been quickly forgotten. But instead, her tweet triggered the global outrage machinery. The rapidity, scope, and intensity of the responses to her tweet (and to various aspects of the aftermath) help underscore the pressing need for K-12 curricula that can effectively teach kids about the rewards and the risk of digital communication.

Godino’s classmates saw her tweet and a number of them tweeted back to tell her that she was mistaken. Realizing that her tweet was becoming a problem, Godino deleted it. But as far too many people have learned to their dismay (obligatory Anthony Weiner reference), the Internet does not do “delete” well. The content of her tweet was already spreading rapidly, and at least one news organization grabbed a screenshot of the tweet before it was deleted. 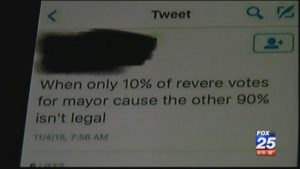 The responses to her tweet grew steadily more threatening, to the point where Revere High School administrators asked if Godino wanted to be escorted to and from class by a school resource officer. She declined, saying that she knew her classmates and had goine to school with them for years, so she wasn’t worried. She said that she did get a little frightened, however, when she saw threatening tweets coming from neighboring towns like Chelsea and Everett, from students and adults that she did not know.

Given the fact that a number of students at Revere High School are the children of undocumented immigrants or are themselves undocumented, the school administration initially said that Godino would be required to take a cultural sensitivity course (a step endorsed by the cheerleader’s mother, who was “disappointed” with her daughter’s tweet) but given her First Amendment rights, would not be disciplined.

The following morning, however, high school administrators told Godino that they had changed their mind and decided to put her on “social probation” through January 25. Under the school’s policies, someone on social probation cannot participate in school events, activities, or teams. District Superintendent Dianne Kelly told the media that Godino was not being punished solely because of the tweet, but said she could not elaborate further. Kelly did suggest that students need to think about what they put onto social media: “If you’re going to stand up and say something that other people will find offensive, then you need to be prepared to deal with the ramifications of that.” The school is convening a task force of teachers and students to work on a curriculum to promote diversity and acceptance.

After Godino’s mother challenged the punishment imposed on her daughter, the school reduced the length of the “social probation” to early December. She said that the school only decided to punish her daughter because of the backlash it experienced.

It will come as no shock to anyone who has been paying attention that Godino’s case has become a cause célèbre on right-wing and libertarian Web sites. Liberty News, for instance, concluded its summary of the incident with the following scorecard:

Similarly, the American Liberty PAC snidely observed that “Because we all know the First Amendment reads, ‘Congress shall make no law…abridging the freedom of speech, unless someone’s feelings are hurt.'”

Without knowing more about the unreported facts of the case, it is difficult to balance the competing interests in this case. Without question, Godino’s tweet on its face seems well within the boundaries of protected speech, and it would have been encouraging to see the school district put its emphasis first on the protection of free speech. This incident was a classic “teachable moment” and I think that the school missed the boat. Beyond the fundamental constitutional issues, the school had an opportunity to use Godino’s tweet (and the teacher’s, for that matter) as the starting point for a terrific discussion about the role of facts in political discourse (a conversation from which several presidential candidates could benefit).

At the same time, I served on the Burlington (VT) School Board for ten years, and I know that many school incidents that initially appear uncomplicated can actually have myriad issues that need to be addressed. We can’t arbitrarily dismiss the district’s statement that Godino’s punishment was based on more than just the contents of her tweet. Without question, however, the school could have done a much better job of promoting the core values of civics (free speech, respect for constitutional law, due process) while it worked through the complicated competing concerns raised by yet another viral social media post.