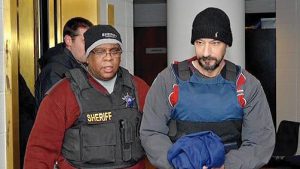 A long-time Chicago middle school teacher, who sparked an international manhunt after fleeing sexual assault charges, was sentenced on Thursday, November 5, to 50 years in prison. “You earned every day of it,” Judge Daniel Shanes told 42-year-old Michael Vucic, an 18-year veteran at Gavin South Middle School in Ingleside, IL.

Before he could be arrested, however, Vucic fled the country. Authorities originally suspected that he was hiding in Germany, but he was located and arrested in September in Sarajevo, Bosnia-Herzegovina. He was returned to Illinois in early January and held on $10 million bail.

During the course of the investigation into the original report, a second victim came forward and told authorities that she and Vucic had engaged in sexual intercourse while she was a 15-year-old student at Gavin Middle School. Authorities subsequently discovered that Vucic had made recordings of some of his assaults of the two students; the videos made it clear that some of the assaults occurred in Vucic’s classroom.

During the sentencing hearing last week, one of Vucic’s victims read a statement; the statement of the second victim was presented by a child advocate. Vucic apologized for his actions, but told the judge that the sexual acts were consensual (despite the fact that both victims were underage, and one was younger than 13). Not surprisingly, that claim was emphatically rejected by Judge Shanes:

You told me that actions were consensual. Understand that this was all you. The law has funny names for these crimes, but there is a perfectly good English word for what you did: rape. This was not consensual.

One of the more disturbing aspects of this case was that not one but three of Vucic’s colleagues were aware of his assaults on the young women and failed to report it. The three teachers — April Courtney, 35, of Wauconda, Michael Lanners, 39, of Lake Villa, and John Keehan, 41, of Elgin — were each charged with a Class A misdemeanor.

Authorities said that Vucic had made self-incriminating statements to Courtney about his interaction with one of the victims “months” before he came under suspicion. Courtney’s attorney argued that she dismissed his remarks as so much hot air, in part because Vucic had a habit of commenting on the looks or apparel of female students. She said that she did not realize that Vucic was serious until he handed her a bag of materials to hold for him after the allegations arose. When she later looked in the bag, she discovered it contained recordings by Vucic of his assaults and turned them over to authorities. In mid-July, Courtney pleaded guilty and was sentenced to 30 days in jail. In addition to her prison time, Courtney was also ordered to make a donation to a child advocacy group and was expected to lose her teaching license.

In early November, Keehan pleaded guilty was sentenced to a year of “conditional discharge” and ordered not to leave the state except for work or family emergencies. He was also fined $2,100 and ordered to donate $500 to two child advocacy agencies. According to his attorney, Keehan is no longer a teacher. Authorities said that Vucic told Keehan about having sex with the older of the two students, but Keehan decided not to report because the student was no longer at the Gavin Middle School and he wasn’t certain that Vucic was telling the truth.

Lanners has contested the charge and is scheduled to appear at a bench trial on November 12.