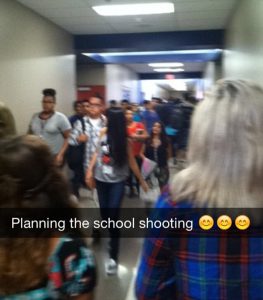 A 16-year-old student in Northglenn High School in Colorado named Kaylee saw the photo in her Snapchat app. As she later told reporters, “It freaked me out.”

Kaylee saved a screenshot of the message and then texted her mother about what she should do. The response was perfect: “Do not pass go, go directly to the office. You need to tell somebody.” Kaylee took the message to the Northglenn school resource officer.

In a somewhat futile gesture aimed at demonstrating that Snapchat is not all about sexting, the company from the start has implemented a notification system that alerts users if someone has taken a screenshot of the content they share. That feature has done nothing to prevent massive numbers of nude Snapchat photos from being captured and shared online, and creative (or highly-motivated) Snapchat users have figured out a number of methods for saving photos without notifying the poster.

In this case, however, the young man who posted the photo was notified when Kaylee took her screen shot and he messaged her not long afterwards. During the course of the conversation, he told Kaylee that he was a student at Sierra Linda HS.

The information, including the photo, was passed on to authorities in Phoenix. They identified the male student (probably by asking Snapchat to identify the sender by his username and cell phone number) and arrested him on one count of felony hoax. If convicted, he could face between 30 and 45 months in prison.

This incident offers a number of important lessons for parents to consider and discuss with their children:

It is terrific that a young woman happened to see the post and felt she needed to do something about it. Fortunately, it does not seem like this was an instance of a serious threat being posted to social media. But what if it had been serious and no one reported it?

That question is driving considerable research into the possibility of using software to monitor and analyze social media for potential threats. But figuring out how to write software to effectively monitor social media and identify potential problems is enormously challenging. There’s the sheer volume of material, there are the numerous privacy concerns, and of course, there is the challenge of properly understanding the meaning of a given tweet. For instance, can you tell at a glance whether a tweet reading “Looking forward to shooting stars” was posted by an astronomer, a red carpet photographer, or an embittered former child star looking to avenge years of failed screen tests and increasingly demeaning commercials? Probably not. But shouldn’t a social media service like Snapchat have a mechanism in place to at least flag the message as deserving additional inspection? It’s a conversation worth having.

It’s important to remember, too, that while the challenges to timely and accurate monitoring of social media by software are immense, they are superable, and probably sooner than we realize (or would like). As with other instances where software will be making decisions about our behavior (assessing our operation of vehicles, for instance), we need to put social and legal structures in place to make sure that the analyses and resulting decisions are reached in an egalitarian and transparent fashion.