iCheat? Will the Apple Watch Be the Next Threat to Academic Honesty? 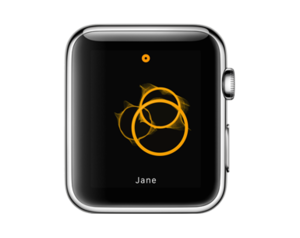 As I discussed in Cybertraps for the Young, virtually every new technology has been adapted by students to cheat on exams. It has led to a digital cat-and-mouse game between schools and their pupils, and by and large, the students seem to be winning.

Now Internet security firm iSheriff is warning that Apple’s latest consumer product, the Apple Watch, could be the latest tool for cheating on tests. In an interesting (but poorly-edited) white paper [see below], iSheriff argues that the Apple Watch “could revolutionize classroom shenanigans and cheating.”

The two features highlighted by iSheriff as potentially useful for cheaters are “Tap” and “Sketch.” The Apple Watch’s Tap feature allows one Apple Watch wearer to send a tactile signal to another Apple Watch wearer. For instance, if I’m in a long meeting (as I was today), I can “tap” on a fellow sufferer’s icon on the watch, and that person (assuming they have an Apple Watch too) will feel two quick (but silent) vibrations. As Apple points out on its Web site, it is possible to create a customized vibration for different people in your contact list.

The Internet being what it is, people are already experimenting with whether it is possible to use this Tap feature to communicate via Morse code. That feels like something of a step backward, but everyone should have a hobby. Regardless of whether the Apple Watch is a success, Gizmodo argues that the device’s “Taptic Engine” is here to stay.

I think the odds that kids are going to learn Morse Code in an effort to cheat on exams is pretty low. Potentially more troublesome for schools and teachers is the Watch’s Sketch feature. Two Apple Watch wearers can use Sketch to send each other small, watch-sized hand-drawn messages. For instance, one person could sketch a heart on his watch, and the drawing would appear on the recipient’s watch, before fading away into oblivion (for obvious storage capacity reasons, Sketches are not saved on either device, which may pose problems for investigators of digital misconduct).

The potential uses of Sketch as an aid in cheating are somewhat clearer. Student A, not having studied, could sketch “3 ?” on his Apple Watch. Student B could sketch the letter “C” or provide a numeric answer. Obviously, Sketch is not a tool for getting help on essay exams, but with the rising number of standardized exams, perhaps this is a potential problem.

While it is interesting and somewhat amusing for iSheriff to be sounding an early warning about the nefarious possibilities of the Apple Watch, it is not likely that this will be a major issue for schools anytime soon. Some analysts predict that Apple might sell as many as 15 million Apple Watches in 2015 but the company has not released any pre-order or actual sales figures. Regardless of what the number actually is, it is relatively unlikely that many of the high-priced watches will be in the hands of students, and certainly not in large enough numbers to pose a significant problem.

Nonetheless, iSheriff’s recommendation for coping with the problem is still a good one:

Our recommendation is that now that you are aware of the risks of the Apple Watch, take the time to review your AUP with this new technology in mind. If you need to make changes, make them now. It is always better to be ready for a problem, than to be reacting to the problem as it happens.

The review and updating of district acceptable use policies should be a regularly-scheduled event, as should the professional development necessary to make sure all educators understand the terms of the AUP. While there are relatively few new behaviors in the school setting (students have probably been cheating since Plato was a teacher), the tools available for academic dishonesty are changing with unprecedented speed. Teachers deserve access to the latest information what can happen and how to prevent it.