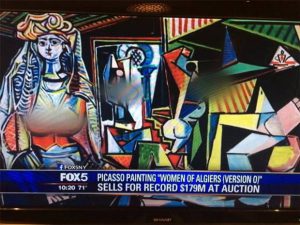 There were two big stories in the art world yesterday. The first was that a painting entitled Les Femmes d’Alger (Version O), which was painted by Pablo Picasso in 1955, sold at auction at Christie’s in New York for a record-breaking $179 million.

Naturally, this is a story that news outlets, particularly those based in New York, would want to cover. But the local Fox affiliate, Fox 5 News, sparked the second major story because it apparently felt that its audience or perhaps even the Federal Communications Commission might be offended if it broadcast Picasso’s work in all of its cubist glory. So, to protect the sensibilities of the viewing audience, the station thoughtfully blurred out the naughty bits of paint that Picasso daubed on the canvas.

Art lovers in New York and around the world reacted with derision, mocking Fox (and America) on Twitter and other social media channels. New York Magazine senior art critic Jerry Staltz got the ball rolling with his salty commentary:

How sexually sick are conservatives & Fox News? They blurred parts of the Picasso painting. #SickMinds pic.twitter.com/5PGw5h5iBs

Weird prudery from the firm who brought us page 3 of The Sun. Fox News affiliate censors breasts of Picasso painting http://t.co/BhjwmOLx85 — david fishel (@david_fishel) May 15, 2015

And one wit immediately saw a connection to a contemporary feminist campaign:

So clearly, The Decency Wars are alive and well. The irony, of course, as Dr. Amy Werbel has repeatedly pointed out in her Twitter feed, @LustonTrial, is that by overreacting to a little bit of painted nudity, Fox News 5 ensured that the unexpurgated painting would be seen by hundreds of thousands, if not millions of people who might never otherwise have known about it. All Fox News 5 accomplished was to make America look foolish (again) and raise the ever-present spectre of Comstockery.

For those with the courage to view it, here’s an image of Les Femmes d’Alger in all of its naked glory: