New Episodes on “The Cybertraps Podcast“:

Thanks to Our Inaugural Mission Partner — Buoyancy Digital

Set out below are some of the headlines that I’ve added to my Cybertraps research files during the past week. Book titles with links are available for purchase on Amazon.com; the other titles are forthcoming. If you have any questions about any of these stories, please leave a message on the Questions and Audience Feedback page for “The Cybertraps Podcast.”

Cybertraps for All of Us

15 April 2021: “Gallows or guillotines? The chilling debate on TheDonald.win before the Capitol siege.” (The Washington Post)

15 April 2021: “The ‘cancel culture’ wars are exhausting and useless. Here are five proposals for a truce.” (The Washington Post)

15 April 2021: “Warning for Android users over Brazilian trojan sweeping the US and Spain: Downloading a dodgy app could leave you open to banking fraud” (Daily Mail [UK])

14 April 2021: “The FBI wanted to unlock the San Bernardino shooter’s iPhone. It turned to a little-known Australian firm.” (The Washington Post)

14 April 2021: “GPS is endangered by a misguided FCC decision made during the Trump administration” (The Washington Post)

14 April 2021: “Google launches new ‘Heads Up’ feature that urges ‘smartphone zombies’ to turn their gaze away from their device while walking” (Daily Mail [UK])

13 April 2021: “‘I Felt Hate More Than Anything’: How an Active Duty Airman Tried to Start a Civil War” (Pro Publica)

13 April 2021: “Are YOU a guinea pig for Google’s latest experiment? Website reveals if you’re one of the millions of Chrome users selected to trial a controversial new ad-tracking system” (Daily Mail [UK])

17 April 2021: [India] “‘We have to relook and reimagine the way our schools run… so that children don’t get lost in cyberspace’” (The Indian Express)

14 April 2021: [US_OK] “Oklahoma teacher is suspended for calling a black student the N-word after he called her it and threatened to knock her out when she stopped him leaving classroom” (Daily Mail [UK]) 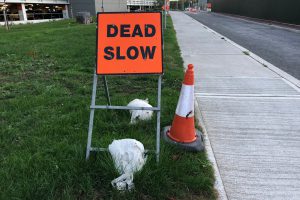 17 April 2021: [England] “Premier League clubs rally together as they get ready to launch social media blackout which will see teams go silent for 24 hours around their matches at beginning of May to combat racism” (Daily Mail [UK])

16 April 2021: [United States] “Cardi B DELETES tweet saying ‘We need cops and that’s facts’ after being pilloried online by the ‘Defund the Police’ movement” (The Guardian)

15 April 2021: [England] “Premier League stars are paying up to £4,000 a month to outsource their social media accounts, with players under fire for lack of authenticity after embarrassing mishaps for Phil Foden and Joe Hart” (Daily Mail [UK])

13 April 2021: “‘Our focus was to get Trump out of office’: CNN technical director makes candid admission to undercover Project Veritas reporter he thought he was on date with after listing his employer on TINDER” (Daily Mail [UK])

17 April 2021: [Global] “‘In this world, social media is everything’: how Dubai became the planet’s influencer capital” (The Guardian)