Funny As Tech: A Thought-Provoking and Entertaining Evening

If you live in the New York area, I highly recommend making a trip to the People’s Improv Theater on East 24th Street in Manhattan to attend a performance of “Funny as Tech.” The show is the brainchild of tech ethicist David Ryan Polgar (@TechEthicist) and comedian Joe Leonardo (@ImJoeLeonardo). Each month, they tape a live (and lively) panel discussion about various issues in the tech world; if you are not in the NYC area, you can download and listen to the performances on either iTunes or Soundcloud. 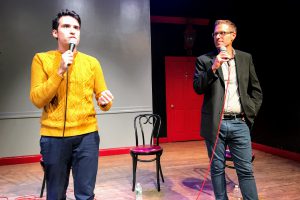 Led by David and Joe, the panelists dove into some of the thorniest issues confronting the tech industry these days: gender, race, and age discrimination. There was general agreement among the panelists that Silicon Valley favors younger employees over older. Among the reasons cited: the expectations that older workers have for reasonable working hours, benefits, higher salary levels instead of access to ping pong or foosball, and the occasional vacation. “The tech industry,” as Thurston put it, “also prides itself on a wilful ignorance of history.” Not surprisingly, there were several references to Robert DeNiro’s character in the movie “The Intern.”

Much of the remaining conversation centered on how a lack of diversity affects not only the culture of Silicon Valley but the technology it produces. More often than not, Jong pointed out, young rich software developers are trying to solve problems that really are only experienced by other young rich professionals (the late-and-unlamented Juicero and the much-derided Bodega are two perfect examples).

That tendency could be alleviated if software developers worked more aggressively to cultivate a wider range of voices and perspectives. But as Thurston pointed out, “Self-disruption is really hard.” Left for another day was the discussion of how significant disruption might be accomplished; however, it is worth noting that as the panel discussion was taking place, I was keeping on eye on the unfolding events in the 2017 election around the country. As we know now, the election was unusual for the sheer diversity of the winners.

In the wake of the allegations against Harvey Weinstein and other powerful male figures, it is not terribly surprising that the role of women in tech drew a lot of discussion. Jong highlighted the Twitter hashtag #thewomanintheroom (which calls to mind Lin Manuel-Miranda‘s brilliant song “The Room Where It Happens” from “Hamilton”). She reminded the audience how often male colleagues simply repeat what women have already said and then get credit for the ideas and suggestions. In one of the lighter moments, Thurston repeated her remarks and said “Hey, I’m just verbally retweeting you!” (A t-shirt is born …)

I’ll embed the SoundCloud file of this performance when it is released. Also, a quick heads-up that on November 21, 2017, Polgar and Leonardo are scheduled to release my in-studio interview on technology, society, and the arrival of sex robots. You won’t want to miss it!