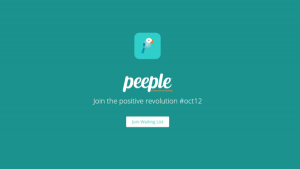 At the end of September, Canadian tech entrepreneurs Julia Cordray and Nicole McCullough announced the pending release of “Peeple,” an app designed to enable users to give one- to five-star ratings to the various people in their lives — basically, “Yelp” for humanity. The reaction to the announcement was, to put it mildly, ferociously negative.

The scathing tweets of American model Chrissy Teigan perfectly capture the shock and outrage of so many:

In an age where both truth and gossip on the Internet can literally ruin lives, this #peeple app is horrible AND scary #yelpforhumans???

This is a real app. It needs not to be. #peeple pic.twitter.com/QpeDnwhujp

So I should just be silent? Things like this need to be called out. It's trending. I'm not breaking news. https://t.co/pM0JzrdTpk

at least I signed up to have the world judge and grade me publicly. I fucking hate this app and the boardroom table it was created around.

We have to make sure our kids/teens stand a freaking chance in this world.

Kudos to Teigen for taking the time to speak out and for her compassionate insight into the tremendous challenges that children face in today’s digital environment.

To be fair, Cordray strenuously objected to the suggestion that Peeple could be used to bully anyone, and proudly listed a number of safety features in an interview with Washington Post reporter Caitlin Dewey (@caitlindewey). Users must be over 21 to use the service, must have a registered Facebook account, and must use their own names when posting a review of someone else. If a user wants to leave a review of someone not already in the Peeple database, he or she must have that person’s cellphone number so that they can be contacted and review the review before it is posted. For those already in the database, positive reviews will go live immediately, while negative reviews are held for 48 hours to give the reviewee (or ‘victim,’ depending on your point of view) a chance to respond.

As two empathetic, female entrepreneurs in the tech space, we want to spread love and positivity. We want to operate with thoughtfulness.

But a bad idea implemented with thoughtfulness is still a bad idea, and this one was terrible. Among other things, as Cordray conceded, the Peeple app was designed in such a way that rated individuals would NOT have the ability to remove themselves or their ratings from the app. Dewey’s analysis of the potential impact of Peeple is spot-on:

It’s inherently invasive, even when complimentary. And it’s objectifying and reductive in the manner of all online reviews. One does not have to stretch far to imagine the distress and anxiety that such a system would cause even a slightly self-conscious person; it’s not merely the anxiety of being harassed or maligned on the platform — but of being watched and judged, at all times, by an objectifying gaze to which you did not consent.

Where once you may have viewed a date or a teacher conference as a private encounter, Peeple transforms it into a radically public performance: Everything you do can be judged, publicized, recorded.

In a supremely gratifying example of how the global hivemind can occasionally promote the values of decency and kindness, Cordray subsequently announced in a LinkedIn post that the Peeple app will be significantly revamped before its eventual release.

I have surrounded myself with positive people for 34 years and I don’t plan on changing it now.

That’s why Peeple is focused on the positive and ONLY THE POSITIVE as a 100% OPT-IN system. You will NOT be on our platform without your explicit permission. There is no 48 hour waiting period to remove negative comments. There is no way to even make negative comments. Simply stated, if you don’t explicitly say “approve recommendation”, it will not be visible on our platform.

I want the world to be positive and this is how I’m going to inspire it by creating the world’s largest positivity app.

Due in part to the huge backlash to the original design of the app, the Peeple Twitter feed and Facebook page have been deleted, and the app’s Web site is unreachable (possibly as the result of a DDoS attack). There is some speculation that the entire thing might be an elaborate hoax: The debunking Web site Snopes.com has a detailed article about Peeple and its founders. While author Kim LaCapria does not reach a definitive conclusion, she is clearly skeptical about the existence of the Peeple app or the likelihood that it will in fact launch later this year.

My two cents: the last thing we need is yet another way to render judgment on our family, friends, and acquaintances. “Let he who is without sin post the first Peeple rating.”