Roanoke Shooting of Journalists Is Terrifying on Multiple Levels 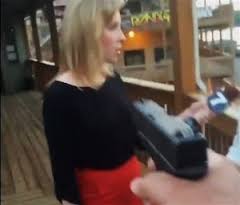 It has been difficult to concentrate today, following the horrifying news that 24-year-old reporter Alison Parker and her 27-year-old cameraman, Adam Ward, were assassinated on live television by a disgruntled former employee of WDB7, the local Roanoke news station for which they worked.

It has been difficult to concentrate because I have worked as a print journalist, my son is dating a local crime reporter in Burlington, VT (roughly half the size of Roanoke, but still …), and because I deeply value the work that journalists do across the United States.

It has been difficult to concentrate because of the inherent horror of all-but-seeing two innocent people die during the same type of local newscast that I turn on each morning here in Brooklyn.

It has been difficult to concentrate because the shooter demonstrated such frightening familiarity with modern social media, and utilized it perfectly to maximize the impact of his horrible assault.

It has been difficult to concentrate because of the fact that the shooter not only created his own video record of the assault for distribution on social media, but did so in manner that is chillingly reminiscent of all of the ultra-violent, first-person shooter games that have flooded the market since the introduction of “Grand Theft Auto” in 1997. (Some might argue that either “Wolfenstein 3D” (1992) or “Doom” (1993) are the true origins of the first-person shooter game, but given the frightening realism of GTA, I think it deserves “pride” of place.)

It has been difficult to concentrate because of the challenge of reconciling the fact that both journalism and violent video games are protected not only by the same amendment to the United States Constitution, but in fact by the very same clause:

Congress shall make no law respecting an establishment of religion, or prohibiting the free exercise thereof; or abridging the freedom of speech, or of the press; or the right of the people peaceably to assemble, and to petition the Government for a redress of grievances.

It has been difficult to concentrate knowing that in the roughly three years since 20 elementary school children were slaughtered in Sandy Hook, CT, there have been nearly 1,000 more mass shootings in the United States, accounting for 1,200 deaths. That, of course, does not begin to reflect the number of men, women, and children who have the misfortune to die in mere 1s and 2s for all of the myriad reasons related to the insane and obscene number of guns that we have in this country.

It has been difficult to concentrate knowing that the administration of President Ronald Reagan all but destroyed public mental health services in this country, resulting in a legacy of homelessness, crime, and woefully underdiagnosed at-risk individuals who not only do not receive the treatment they need, but have endless access to violent stimuli and access to weapons that help them live out their fantasies.

It has been difficult to concentrate because this horrible event, like every other horrible event that has occurred in recent years, is deeply complicated. Even in the first rush to analyze the shooter’s statements, work history, and social media presence, it apparently encompasses issues of career frustration, race, sexual identity, ego, mental illness, Warholian self-aggrandizement, fantasy, and so on. There is no lack of material to analyze.

It has been difficult to concentrate because I have spent much of the day wondering how people who market semi-automatic handguns and ultra-violent video games really live with themselves. I get the profit motive and perhaps the belief that their products not only are protected by the Constitution but also are shining examples of that document’s innate wisdom. But I also wonder whether they ever stop to reflect on whether their actions are creating a world in which they want their children or grandchildren to live.

It has been difficult to concentrate because I truly wonder whether there are enough politicians willing to show the courage and independence necessary to craft reasonable regulations on the ownership and use of guns (as clearly contemplated by District of Columbia v. Heller), or whether there are enough parents, game retailers, and game manufacturers willing to actually enforce the age ratings in place for games. Elementary school kids should not be playing games like GTA but no one should have any illusions that they don’t.

It’s never entirely fair to throw Hollywood depictions of politicians or Presidents into the mix, but this does seem an a propos time to recall the concluding speech from The American President. I’m a sucker for rom-coms in general, but throw in American politics and I’m hooked (other favorites include, of course, Mr. Smith Goes to Washington and Dave). What’s compelling about the speech that Aaron Sorkin wrote and Michael Douglas so stirringly delivered is that it references perhaps the two most existential threats we face: global warming and guns. It makes for wistful viewing.