Free Speech, LGBT Rights, Cyberbullying, Separation of Church and State: Bentonville School Board Drama Has It All

The Court and the Cross

The relatively small town of Bentonville, Arkansas (pop. 40,000+), located in the far northwest corner of the state, has a national profile that belies its size. Most notably, Bentonville is the site of the national headquarters for Walmart, the world’s largest retail company, with annual sales in excess of $250 billion. (If Walmart were an indpendent country, it would rank roughly 55th in the list of the world’s nations by gross domestic product, according to the World Monetary Fund, between Israel and Morocco.)

Thanks in large part to the staggering revenues of Walmart, Alice Walton (daughter of Walmart founder Sam Walton) had the economic wherewithall to establish and stock the Crystal Bridges Museum of American Art with a remarkable collection of American art. Her predatory practices in acquiring famous pieces led to same high-profile battles not only with individual museums, but in some cases, with entire cities. Philadelphia, for instance, all but mortgaged City Hall to raise $68 million to outbid Walton for “The Gross Clinic,” one of the signature pieces by American artist Thomas Eakins.

In what is a reliably red state, Bentonville is positively scarlet. In 2012, President Obama lost Benton County to Republican challenger Mitt Romney by 40 percentage points, nearly double the 24-point margin by which Romeny won the state as a whole. (To be fair, Benton Country wasn’t the most challenging part of the state for President Obama; there were eight counties he lost by more than 50 percentage points, and a handful of others that were close to that level.) But notwithstanding the region’s innate conservatism, the winds of social change are blowing stronger here as well.

Over the last several months, an organization called Bentonville Public Schools Citizens for Equality (BPSCFE) has been advocating for changes to the school district’s Equal Employment Opportunity policy. Currently, the policy states that the Bentonville Board of Education:

will not discriminate against any employee or applicant for employment because of race, religion, color, sex, gender, national origin, age, or disability.

BPSCFE is asking the Board to adopt language that would also protect employees on the basis of “pregnancy status, marital or parental status, sexual orientation, veteran status, gender identity and genetic information.” According to the group’s Web site,

Adding protections for those classes that have been identified but not officially recognized by federal and state law sends the message that Bentonville Public Schools will not tolerate discrimination. It gives peace of mind to current employees and makes the district a more attractive employer. Not adding more inclusive language will result in the perception that Bentonville Public School District reserves the right to discriminate.

At some this spring, Board member Grant Lightle apparently asked the Superintendent of the Bentonville School District, Mike Poore, to review the district’s EEO policy in light of the pending Supreme Court decision in Obergefell v. Hodges (a decision in which is expected in the next three weeks). At the Board’s April 20 meeting, a motion was made by Board member Rebecca Powers, seconded by Brent Leas, to instruct the Superintendent to leave the EEO policy as is. That motion failed by a 2-4 vote. 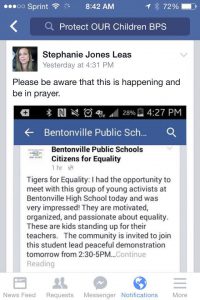 And this where things — with the help of social media — started to get unpleasant. On May 8, a number of student groups organized a rally under the banner “Tigers for Equality” to speak out in favor of the proposed changes to the district’s EEO policy. Participating groups included the Bentonville High School Gay-Straight Alliance, the Feminist club, and the Young Democrats. In response to the news of the rally, Stephanie Jones Leas (the wife of Board member Brent Leas) posted a message to a public Facebook group entitled “Protect OUR Children BPS” (image at left). Clearly not understanding the nature of a “public” Facebook group, Board member Powers added a response that read:

The young lady that is heading this up is an atheist. She is also rude, and disrespectful. I had the displeasure of watching her at the Mary Beth Tinker event at BHS. She was reprimanded that day by school officials.

The comments by Powers sparked a bit of an uproar in Bentonville, where declaring someone an atheist is clearly a serious insult. Many were quick to label her comments “cyberbullying,” but in all fairness, that’s something of an overstatement. It seems pretty clear from the circumstances that Powers intended to make her remarks privately to a sympathetically-minded person and did not understand that she was actually making the comments to the whole world. And while she was clearly talking about a particular student, there is no indication that she attempted to target her remarks at the young girl directly.

We should be a little less quick to dub every negative comment on the Web as cyberbullying. At the same time, this perfectly illustrates why educators, administrators, and yes, school board members, should refrain from making any comments about students on social media. Even with the best privacy protections in the world and all due care, it is still far too easy for online comments to be seen by people other than for whom they were intended.

Powers wrote a defense of her comments and gave it to a local reporter, who shared it with BPSCFE. There was no intent, she said, to make the comments public and she refrained from identifying the young woman in question, and she apologized “for any hurt this has caused.” However, she reiterated her view that the student misbehaved at a school event: “I personally observed teachers verbally reprimand ‘a student’ for rude and disrespectful behavior that I personally observed at a public event. It is not ‘bullying’ to state an opinion that an unnamed student’s behavior was ‘rude and disrespectful,’ or to comment on potential motivations for that behavior.”

An editorial writer for the Northwestern Arkansas Democratic Gazette contradicted Powers’ version of events: “The student Powers referred to caused a disruption moments after Tinker’s talk ended by shouting a demand for a chance to ask a question. It was an uncomfortable moment, but that’s about all. Tinker ended up answering the question.” The editorialist agreed that Powers’ comments did not arise to “cyberbullying,” but suggested that her comments were nonetheless ill-advised:

Powers, in the heat of this controversy, did forget she has a responsibility as a member of the school board to go above and beyond in protecting students — all students, not just the ones she likes or agrees with — in the organization she leads. If she wants to aggressively take a stand against Lightle’s proposal, that is her right. It’s what people elected her to do. But focusing that fight on a teenage student? No school board member should see that as an appropriate response.

Beyond Powers’ insufficient understanding of how social media works and her dubious attack on a student, the real issue here is the separation of church and state. Powers’s written response makes her theological objection to expanding the district’s EEO policy abundantly clear:

As usual in debates about homosexuality and cross-dressing, when these divisive issues are forced on school boards by those who wish to normalize harmful behaviors to impressionable children, supporters of these categories make accusations of ‘bullying’ when confronted by the truth.

This is my final comment on this particular matter, and I will continue to refrain from naming the student involved to whom I was referring in my post. This is a simple case of an opinion intended for private discussion, that did not even name a student, that was posted on the wrong page, but has now been turned into an excuse for militant supporters of extreme views to cyber bully me and my children.

I will continue to firmly oppose anything that would expose impressionable, innocent young children to the harms surrounding homosexuality, transgenderism, transvestism, and cross-dressing. Some topics should be handled in the home rather than in public education, and these topics are inappropriate for young children to be facing and dealing with.

I agree emphatically with the first half of Powers’s final sentence. Some topics should be handled in the home, not at school, and religion is foremost among them. Her mischaracterization of the issue is disturbing: BPSCFE is not asking the Board of Education to change the district’s curricula to discuss or actively promote the issues that concern her; it is simply asking the Board of Education to formally put current and future employees on notice that it will not discriminate against them (as many other institutions in Arkansas have already done) on account of who they are.

Parents are entitled to raise their children under whatever belief system they see fit (provided the children are healthy and safe). They are not entitled, however, to demand that a public school system serve as an agent of their religious beliefs. Acceptance of differing views and lifestyles is not ratification or even endorsement; it is simply tolerance and accommodation.

I spent ten years on a local school board myself, in Burlington, VT (roughly the same size as Bentonville, but at the opposite end of the political spectrum). I know the challenges of balancing wildly competing worldviews among constituents. The challenge for school board members is to separate their personal beliefs from public policy. While Powers may believe that “homosexuality, transgenderism, transvestism, and cross-dressing” are crimes against her religion, they are not crimes against the state. Unfortunately, Powers seems to be confusing the two.