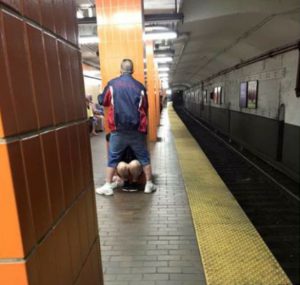 The Massachusetts Bay Transit Authority has had a tough year. The commuter service was faced with enormous challenges last winter when the region was pummelled by eleven plus feet of snow and by most accounts, the MBTA blew it. By mid-February, the agency’s schedule was in shambles and general manager Beverly Scott was forced to admit that it would take the MBTA at least a month to get back on track. (At about the same time, Scott abruptly announced her resignation, effective April 11, 2015.)

Now come the latest embarrassment for the beleaguered state agency. On Friday, a passenger on the MBTA’s Orange Line snapped a photo of two people engaged in a sexual act on the State Street platform and posted it to the MBTA’s Facebook page with a tart message:

Dear MBTA, I understand you are having financial problems and it is difficult to maintain a broken system, however my tax dollars should be going to pay your police force because I shouldn’t have to stand next to a man receiving oral sex.

The incident allegedly occurred at 7:30pm, in a station in the heart of Boston. Transit police officials said that they planned to work aggressively to identify the individuals involved. Although the police did not specify what steps they are planning to take, it is likely that they will look for surveillance video that will enable them to match the man’s outfit to a face, and perhaps that of his companion as well.

If the couple is identified, they both could face prosecution for open and gross lewdness, which can carry a charge of up to 3 years in prison. They also risk being placed on the state’s sex offender registry.

Transit police spokesman Lt. Richard Sullivan reminded people to contact transit police directly if they have similar complaints, rather than posting material to social media channels. He told reporters that the MBTA’s Facebook and Twitter accounts are “not monitored regularly,” which apparently is true for the train platforms as well.

A couple of broader points need to be made. First, the fact that two people would engage in an intimate sexual act on a busy train platform during rush hour in the middle of Boston is yet another sign that sexual mores in this country are undergoing a fundamental shift. And while this couple did not appear to be recording their tête-à-tête, who now would have been surprised if they had? In fact, it’s vaguely surprising that they weren’t. Much, much more will be written about the impact of the Internet on attitudes towards sexuality.

But of course, someone nearby had a camera. How could that not be true? By conservative estimates, there are at least 200 million camera phones in use in the United States right now, and the number will continue to steadily rise. Putting aside the cameras operated by government and business, it is virtually impossible to find a camera-free space in this country. It’s like those poor bearded headphone-wearing fanatics searching desperately for those last few acres of land free from the sound of human activity.

This case, then, raises an interesting question: If there is a possibility of being recorded wherever we are, then is there any distinction anymore between the public and the private? And if not, then did this couple actually transgress boundaries, or are they just ahead of their time?

[Update] Shortly after this post was published, I got a couple of nice notes in my Twitter feed:

@fsl3 I'm biased towards the articles…I'm the original photographer of the "sex couple". Nice to read something so thought provoking.